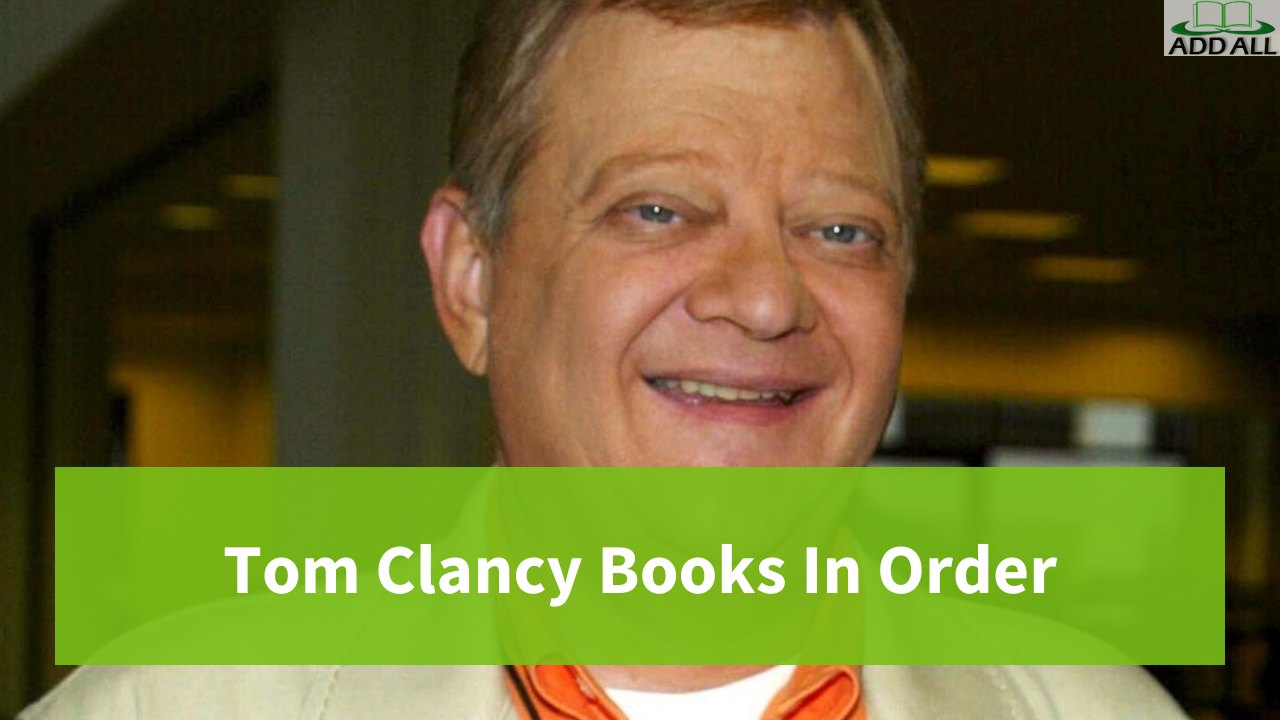 Tom Clancy is a world-famous American author who has written many best-selling books. His books are usually techno-thrillers, which means they are full of suspense and action.

The first Tom Clancy novel was published in 1984. It was called “The Hunt for Red October.” It was about a USSR submarine making its way to America with secrets that could start World War III. The book was made into a movie in 1990, and it was a huge success.

The book made Clancy one of the best-selling writers in that year. It also launched him as a successful author. He went on to write many more novels after this, including his famous “Jack Ryan” series, “Patriot Games,” “Clear and Present Danger,” and “The Sum of All Fears.” His books have sold over 100 million copies worldwide!

Tom Clancy’s books are full of action and suspense, so they are often turned into movies or TV shows. Many have also been made into video games, including “Tom Clancy’s Splinter Cell,” “Tom Clancy’s Ghost Recon,” and “Tom Clancy’s Rainbow Six.” The video game company Ubisoft even created a new character, Sam Fisher, based on the main character in Tom Clancy’s novel, Ryan.

The last book written by Clancy is called “Command Authority.” It was published in 2013.

He passed away in October 2013 due to heart failure. His last book was finished by a writer he had worked with before his death, but it is still a great read that can be enjoyed at any time!

Many of Tom Clancy’s books were also published posthumously. The books after 2013 were written by other authors, such as Mark Greaney, Grant Blackwood, Mike Maden, and more.

Due to characters and events overlapping, some books fall under more than one series.

This book is about a Soviet nuclear submarine making its way to America with secrets that could start World War III.

Jack Ryan, the main character, works for the CIA. He is sent on a mission to stop this sub from reaching America. Fighting danger at every turn, Ryan must do everything he can to keep the world from being plunged into another devastating war.

The book was made into a movie in 1990, which was also successful.

The Hunt for Red October is for readers who love suspense and action. This book is both exciting and intense. It will keep readers guessing until the very end!

This is another Jack Ryan novel, but it is set in the Cold War era.

Jack Ryan is a young CIA analyst who is just starting his career. He is given a top-secret mission to stop the assassination of the Pope.

The mission quickly goes awry, and Ryan finds himself in the middle of a dangerous conspiracy. He must race against time to save the Pope and prevent World War III from breaking out.

Red Rabbit is set during the Cold War era for readers who love suspenseful stories set in the Cold War era. This book has all the action and intrigue of a Clancy novel, with the bonus of being set in a fascinating time.

This book is about the war on drugs and the battle against the Colombian cartels.

Jack Ryan, the main character, has been moved up in rank at his agency and given more responsibility than before. He is sent to Colombia on a mission against drug cartels, where he quickly realizes that the situation is much more complicated and dangerous than he first thought.

This book is full of action, suspense, and mystery and gives readers a glimpse at the world of politics.

Clear and Present Danger is for readers who want to read about the war on drugs and the battle against cartels. This book is full of action, adventure, and suspense.

If you’re looking for a book packed with action, suspense, and political intrigue, look no further!

This book is about John Kelly, a Vietnam veteran, a former Navy SEAL before becoming a CIA agent, code-named Mr. Clark.

His wife accidentally died six months ago, and his girlfriend was killed. He’s seeking revenge for her death. He has returned to the military to save prisoners of the Vietnam war.

John Clark is a ruthless killer who does whatever it takes to get the job done. When he is asked to take on a new mission for the CIA, he doesn’t realize that it will be his most dangerous yet. John must rescue the prisoners of war without them getting killed himself or giving his identity away.

This book is full of action, suspense, and intrigue.

John Kelly is a fascinating character, and Tom Clancy does a great job bringing him to life. Readers will sympathize with his loss and root for him as he seeks justice. The plot is fast-paced and thrilling, and the ending is satisfying.

Executive Orders is a 1376 pages book about the President of the United States and deals with various national crises.

A group of terrorists has launched a devastating attack on the United States. Jack Ryan is now the President of the United States after the assassination of the former President, the Joint Chiefs, the Supreme Court, and nearly all of Congress dead.

He has to deal with many different types of people trying to get him overthrown. And he is also trying to prevent a war from happening that could have catastrophic consequences for the entire world.

This book focuses on the aftermath of a terrorist attack and how it affects the leader of the US. Executive Orders is full of action, suspense and deals with terrorism, military matters, and political intrigue.

This is a great read for anyone who wants to know more about the inner workings of the American government and the challenges faced by the President. It will keep you engaged from beginning to end and is sure to leave you wanting more.

It is action-packed and fascinating, and informative on some level. Tom Clancy does an excellent job exploring both sides of the political spectrum.

The Sum of All Fears (A Jack Ryan Novel)
More info

In The Sum of All Fears, a nuclear weapon is hidden somewhere in the United States, and terrorists plan to use it to destroy the country. Jack Ryan is the only person who can stop them. He has to find the weapon before it’s too late.

Nuclear weapon is not the only problem Jack Ryan has to deal with. The President of the United States may also be a problem. He is unsure if the President can handle the situation or is trustworthy.

Tom Clancy’s The Sum of All Fears is a novel that gives readers insight into the inner workings of governmental organizations such as the CIA and FBI. It also explores topics such as terrorism, military matters, and political intrigue.

I recommend The Sum of All Fears to readers who enjoy reading about international politics and/or political thrillers. There are many twists and turns in the story, and it can be hard to predict what might happen next. Tom Clancy’s writing style is engaging, too; he does an excellent job of keeping readers hooked until the very end. So if you’re looking for an exciting and well-written novel, then be sure to check out The Sum of All Fears.

The Cardinal of the Kremlin (A Jack Ryan Novel)
More info

Tom Clancy’s The Cardinal of the Kremlin is an excellent sequel to “The Hunt for Red October”. In this novel, Jack Ryan has to help a high-ranking Soviet spy, code name “Cardinal,” who is in danger of being arrested and executed by the KGB.

The race against time is on as Ryan tries to save Cardinal and get him out of the Soviet Union. But it’s not going to be easy, especially since the KGB is after them every step of the way.

This novel is full of suspense, intrigue, and action. It’s a page-turner that will keep readers glued to their seats until the

The Cardinal of the Kremlin is for anyone interested in reading about Cold War-era politics or political thrillers.

Tom Clancy does an excellent job of exploring both sides of the story; he goes into great detail about all sorts of topics like international politics, espionage, history (especially Cold War history), etc. It is well-written and fast-paced, with lots of exciting action scenes.

Rainbow Six is an action-packed novel that introduces readers to John Clark and his team of elite soldiers. Led by Clark, the team’s responsibility is to stop terrorists before they can complete their plans and cause destruction and chaos on a global scale.

In this novel, the terrorists have been identified, but the amount of time before they can strike is unknown. Clark and his team must hurry to stop them before it’s too late.

Rainbow Six is a novel for anyone who enjoys reading about counterterrorism operations or action-packed thrillers in general.

In this book, Ryan is targeted by an Irish terrorist group after he thwarted their attack on the Royal Family in England. Ryan must again use all of his skills and training to take these terrorists down and keep his family safe.

Patriot Games is a classic techno-thriller with lots of action and suspense.

It is for readers who love a good thriller and want to read about Ryan’s adventures.

In Red Storm Rising, Clancy takes readers on a breathtaking ride as they follow Ryan and his team as they try to stop the Russians from launching a full-scale assault on NATO.

Red Storm Rising is a standalone novel without Jack Ryan or John Clark. However, it focuses on the situations and themes that have made Clancy’s characters so beloved by his readers.

Red Storm Rising is an exciting novel for those who enjoy reading about international politics or political thrillers in general. It offers an exciting perspective on how a third world war could start and unfold at a fast pace that will keep readers turning the pages until the end.