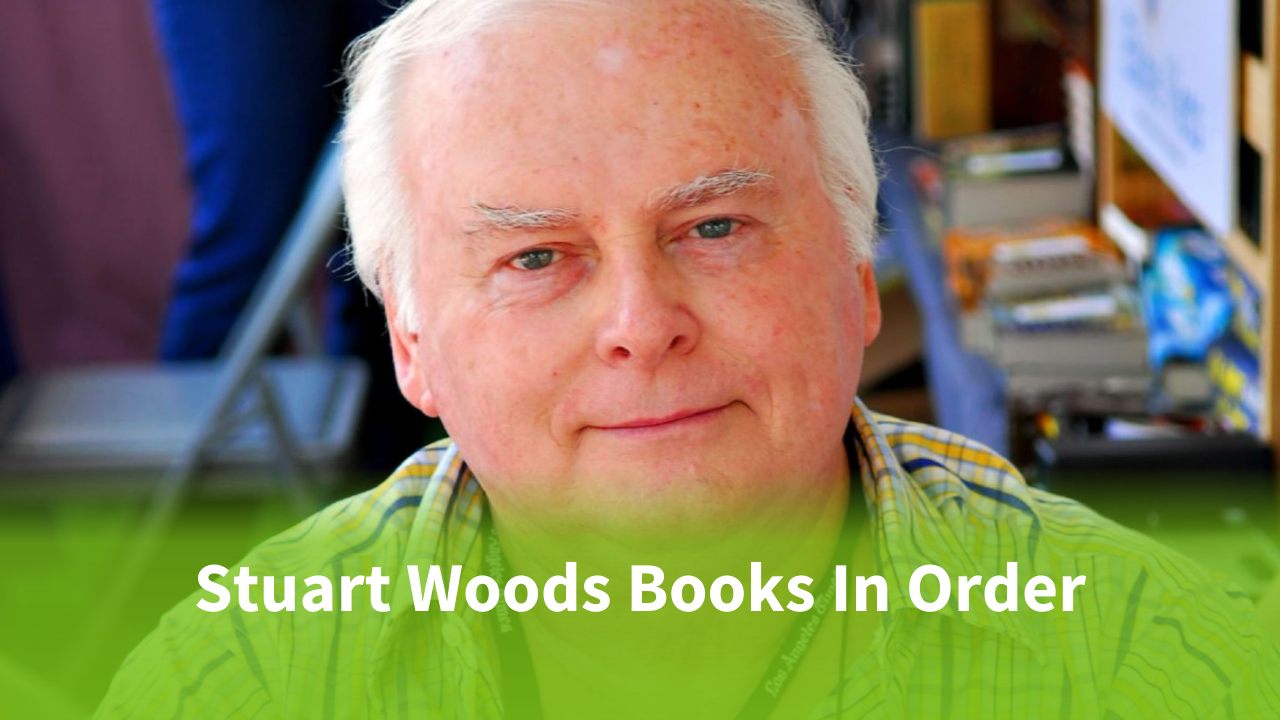 Woods is an American author best known for his crime books, notably the Stone Barrington series. However, very few mystery authors from the South are as creative and well-known as Stuart Woods.

Woods, a sociology major, started his career by composing commercials and print advertising. However, his enthusiasm for sailing inspired him to write nonfiction books about his travels.

Many of Stuart Woods’ finest works will be featured here, along with brief synopsis of each, in addition to his most recognized series.

Will Lee Books In Order

Who is Stone Barrington?

Stuart Woods’s Stone Barrington is a fictional character and the protagonist in the Stuart Woods series of crime fiction.

The first time we encounter him, he has recently ended his work as an attorney and now occupies himself as a private detective and bodyguard for hire.

Stone Barrington is a complex and interesting character who can be charming and dangerous.

Stone is a man of many talents and occupations.  He is a skilled investigator who can fight hand-to-hand, play the saxophone (even his jazz band), and race cars.  He also possesses a sharp, quick wit which often gets him out of trouble.

Wood’s editors tried hard to convince him to change “Stone Barrington” to something else, but Wood refused.

What type of books are they?

The Stuart Woods series is crime fiction.  Stone Barrington is an attorney-turned private investigator who finds himself in all situations.  From simple cases like retrieving a runaway heir to investigations like catching a murderer, Stone’s adventures are marked by Stone taking on various cases which often involve the rich and powerful.

What are Stone Barrington’s best qualities?

He is a tall, good-looking man with an easygoing manner and a quick wit.

He is also knowledgeable and resourceful, with a natural talent for investigation and problem-solving.

He has a wide variety of interests and is well-educated.

Some of Stone Barrington’s best qualities include his investigative skills, fighting abilities, and quick wit.  These come in handy as he often finds himself in dangerous situations.  He is also a gentleman and possesses good manners, even under pressure.

What are Stone Barrington’s flaws?

While Stone is generally a likable character, he does have some flaws.  He can be impulsive and headstrong, which often gets him into trouble.  He is also a womanizer and has been known to have many affairs throughout the novels.

Stone’s relationships with women are complicated.  He has slept with many of his female friends. However, he is never too attached to them and is very careful not to get in trouble.

Set around 1920, a youngster’s body is discovered in Delano, Georgia, battered in what looks to be a ritualistic manner. Will Henry Lee, the former cotton farmer who has been selected as Delano’s first chief of police, must solve the case. This orchestrates a narrative in which the little town has to deal with three more police chiefs over the next three decades as they all try to solve the murder and the motive behind it.

With the supposedly tranquil and pleasant neighborhood providing a facade of respectability, Woods brilliantly reveals what lurks behind.

The first book of the Will Lee series examines political power and delves into the dark core of what drives specific individuals to do what they do. This is one of Woods’ most well-known works, adapted into a television mini-series in 1983. There are seven novels in all.

New York Dead is among the most renowned Woods books of all time, and not only because it is the beginning of a long series but because it contains one of the writer’s most engaging storylines.

Several of Stuart Woods’ followers believe it is his finest novel. This book masterfully establishes his personality for the first and greatest installment of the Stone Barrington series.

With a slew of plot twists, the reader hardly knows what is likely to unfold next. This is an excellent starting point for not just the character of Stone but also Woods’ career as a whole since it truly highlights what he has to offer to the crime genre.

Dead in the Water
More info

Barrington’s romantic excursion to the St. Marks Islands goes tragically wrong when his traveling partner abandons him. Instead, he spends his holiday defending an attractive widow suspected of killing her husband on their boat and throwing his body in the sea. Stone must defend her against Sutherland, a man whose intentions are unknown, as it seems there is much more to the case than what is apparent.

This is genre fiction at its finest since it has great fun with the subject material and uses mystery and tension to significant effect. Woods also demonstrates his mastery of the shocking twist with the tale twisting on every page. Understanding precisely what he is attempting is for the admirers of the writer and the fans of the genre.

Woods moves to a female character in this crime novel after a succession of bestsellers centered around the adventures of the legendary Stone Barrington, with mainly seamless and pleasant results. Major Holly Barker, a clever, beautiful, and strong-willed military officer forced into retiring early at the age of 37, trades in her bars as a military cop for the deputy chief of police badge in Orchid Beach, Florida. But under the cheerful veneer of this tranquil, affluent island village lurks a horror that culminates in the cold-blooded homicide of one of Holly’s new coworkers.

Woods’ writing style is clear, and he recounts the tale straightforwardly. Unlike several other popular suspense/thrillers, this novel contains no blatant sex or violence and may nearly be classified as “comfortable” because it is relatively mild.

However, it holds the reader’s attention and is an enjoyable, short read that does not require much thought. Orchid Beach is a fantastic place to start for suspense/thriller enthusiasts looking to start a new easy-to-read series. Holly Barker is fierce, personable, yet prone to blunders, something many readers relate to.

Someone tries to shoot Stone and his ex-partner Dino after meeting Billy Bob, a smooth-talking Texan carrying a stack of scarce two-dollar notes. Stone provides Billy Bob a reprieve for the night despite his best interests but quickly regrets it.

The slick out-of-towner has vanished in Stone’s townhouse, and someone has been discovered dead. Stone is now torn between two love interests and a murder inquiry that threatens to derail everything.

Two-Dollar Bill contains all of the plot twists and witty banter that fans have come to expect from Stuart Woods’ novels. When a franchise involving a single character lasts so long, the writer does something right. That type of popularity naturally makes a book-hungry individual wonder whether it may be a treasure trove for them to dig when their regular supply of novels starts to dry up.

After the tragic hardships and struggles of the action-packed Two-Dollar Bill, author Woods’s 12th Stone Barrington thriller shows the New York attorney getting a professional vacation. Stone inherited a mansion on Dark Harbor, Maine, from his first cousin Dick. This happened after Dick and his family were killed in what the local police believe was a murder or suicide. But, it isn’t, and Stone, together with series regulars CIA operative Lance Cabot, NYPD Lt. Dino Bacchetti, and lover Holly Barker, travels to Maine to investigate the killings.

This is a fun and knowledgeable mystery escapade that interests its readers on many levels and does precisely what it aims to do. Moreover, since it’s the 12th novel in the franchise, it represents the characters, particularly Stone himself.

The universe of Stone is likewise well-crafted, constructing on and expanding what happened before while also increasing the action and offering the audience more of the brilliantness they have come to anticipate from the franchise.

An urgent phone call from halfway across the world interrupts Stone’s vacation to Venice with a flaming Mafia princess. A famous murder has sparked outrage in Los Angeles, and a former sweetheart is pleading for Stone’s assistance in more ways than one. And once there, among the glory and depravity of Hollywood, he must delve into the bowels of film society to uncover the murderer before a court trial robs him of his final shot at a life he once passionately desired.

Stuart Woods’ writing style is fast and casual, and it pulls the audience along effortlessly. In addition, it attempts to maintain the reader’s attention by keeping the surprise until the last page and not revealing it too soon.

L.A. Dead succeeds in building upon what preceded it, with its well-established characters and universe, despite being the 6th installment in the franchise.

Amanda Dart has amassed many enemies owing to her poison pen and ice queen demeanor. But, now Amanda’s personal and private transgressions are being sent to anybody who can read by an anonymous gossipmonger. Determined to clear her name, she appoints the assistance of a New York lawyer and private investigator Stone Barrington in determining the identity of the faxer who is giving her a taste of her own medicine.

Dirt is a clever and fast-paced narrative. It is full of affluent and renowned characters. The narrative is loaded with tensions that keep the reader interested. The perspective of gossip columnists and tabloids is fascinating.

When a billionaire approaches Stone Barrington to knock some sense into his errant son, it appears to be a simple task; no one knows the ultra-secret wealthy people’s faults and pleasures better than Stone.

However, when Stone and his former protégé, Herbie Fisher, delve deeper into the case—and an old one returns to haunt him—he finds that even he may have misjudged how far some individuals will go to cover up their crimes and plot new ones.

In this novel, Woods employs his tried-and-true principles with a bit of mission that raises insignificance, some new female protagonists, and the hero’s relationship with them.

Stone Barrington is well at home in New York City once more. This time, he is accompanied by the aggressive Holly Barker, the lady police chief of Orchid Island, Florida. She arrives in Manhattan on the hunt for a fugitive from her jurisdiction. And Stone is delighted to see her until her presence poses a severe threat to both of them. To their astonishment, she becomes the pursued rather than the pursuer.