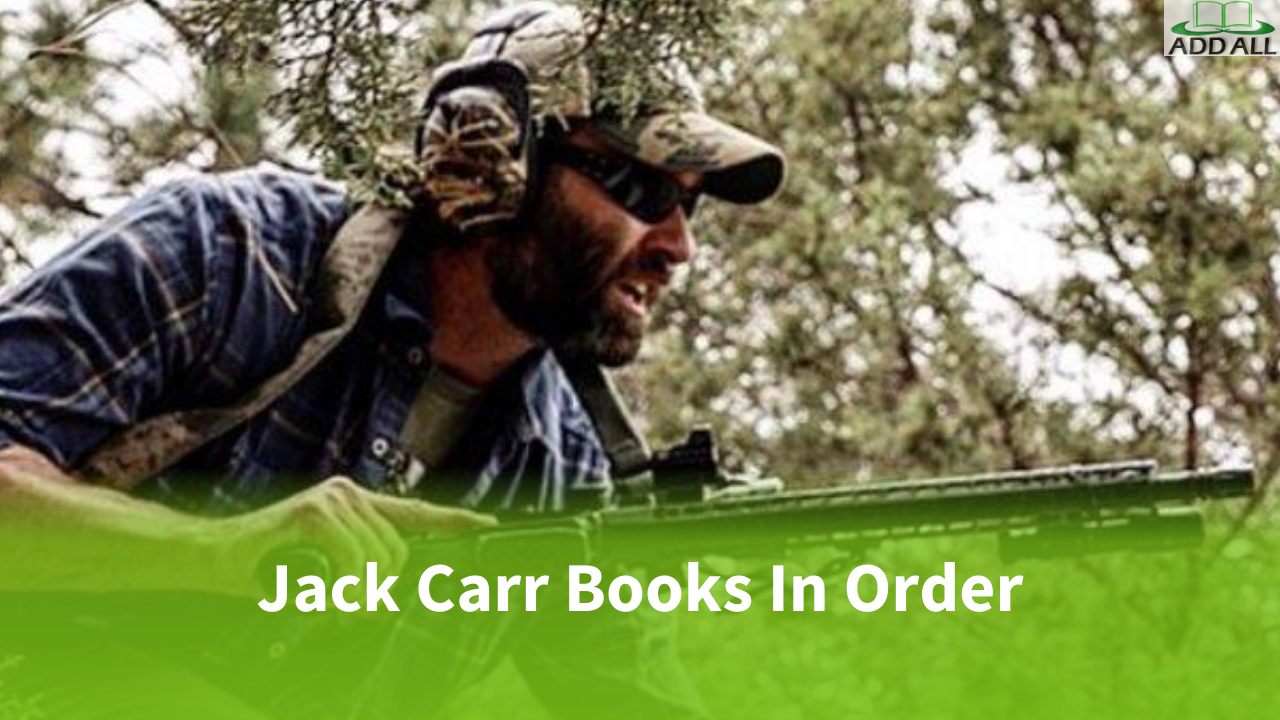 Carr is a former Navy Seal who used his experience during military service to develop thrillers. He brings a new level of intensity to the thriller genre, writing about the finest warriors of our generation.

He served for twenty years in the US Naval Special Warfare. During his time as a Navy Seal, Carr served as a Troop Commander, Task Unit Commander, Team Leader, and Platoon Commander in Iraq, Afghanistan, and Philippines.

Carr started his new career in novel writing after retiring from military service in 2016.

The first Jack Carr book is called “The Terminal List”. It was published in 2018 and became a New York Times Bestseller.

The Devil’s Hand is the latest Jack Carr’s James Reece series (#4) published in 2021.

In the Blood is the James Reece series book #5 will be published in 2022.

In the Blood: A Thriller (5) (Terminal List)
More info

James Reece is a former Navy Seal whose team is killed in an ambush in the book. After coming home, his family is murdered. Reece finds out that the American government was behind the deaths of his team and family and sets out to avenge them. Reece is a very skilled fighter and doesn’t hesitate to kill anyone who gets in his way.

The Terminal List is a book for fans of thrillers and suspense books. It has great action and plot.

However, I suggest avoiding this book if you are a supporter of liberals. The author’s anti-liberal political opinions are strong and may ruin the fun for some readers. And Reece’s reaction to the death of his family is not very realistic. He barely grieves and is soon flirting with a reporter.

But despite these flaws, the Terminal List is still an excellent read for anyone who loves action and suspense.

The story is about a former Navy Seal, James Reece.

Reece is trying to live a peaceful life in Mozambique with his best friend.

However, the United States government finds him and asks for his help to exchange a Presidential pardon and immunity for his friends. They want Reece to kill a terrorist, which takes Reece all over the globe, including Turkey and Ukraine.

The book is fast-paced and action-packed.

Jack Carr spent over twenty years in the military and used his expertise to write True Believer. Carr uses vivid action scenes and settings throughout the novel to slow it down.

He likes to get into the details of the weapons used and the tactics to make the story more realistic. He also uses interesting tactical details in balancing truth and fiction, making the novel an enjoyable read.

Reece is a very likable character. He is a tough Navy Seal, but he also has a heart. The author does a great job of developing the characters and creating suspenseful situations.

The supporting characters are also well-developed, with their motivations, backstory, and goals.

The story flows smoothly, and Carr’s writing style is easy to read. The plot is well-constructed, and there are minimal plot holes.

Savage Son is the third book in the James Reece series published in 2020. For over twenty years, Jack Carr was a Navy SEAL and has used his experience to write action-packed and suspenseful novels.

In Savage Son, Reece is recovering from brain surgery in the Montana wilderness when he learns that the Russian mafia is after him. Reece must use his tactical skills and knowledge of weapons to take down the mafia and the traitorous CIA agent that put him in this situation.

As Reece battles the Russian mafia, Carr makes it obvious that there are no boundaries in Reece’s quest for justice. Readers will not be disappointed as they follow along through this suspenseful journey that comes complete with weapons knowledge and actual tactics used by SEAL snipers all over the world.

Savage Son is a novel that keeps readers on their toes with action-packed scenes and twists. Jack Carr’s writing is easy to read but still enjoyable enough to keep readers engaged throughout the story.

However, someone may find too much detail in the book, and they may not be interested in all the infomercial products that Jack Carr is promoting.

The plot is well-constructed, and the characters are well-developed. The action scenes are realistic and fast-paced. Carr does a great job balancing truth and fiction, making the novel an enjoyable read.

The Devil’s Hand is the fourth book in the James Reece series published in 2021. Carr has written a fast-paced, action-packed thriller that is sure to keep readers on their toes.

The novel follows Reece as he tries to stop a bioweapon from being released in the United States.

Twenty years after the attacks on September 11th, 2001, America is looking for closure, but still not completely healed. A new president with ties to the attacks emerges and summons James Reece, a former Navy SEAL, to help take out a group of men who were part of 9/11 plotters while remaining hidden for 20years.

Meanwhile, an American Ph.D. student gains access to bioweapon that only a select group of officials knows. A second-generation agent, he’s been given a mission to cripple America.

Jack Carr has written a series mixing captivating political intrigue with personal experiences on the dark side of American covert missions. The novels force the reader to consider the complexities of political and social systems and the values and implications of living in a post-9/11 America.

But despite the political views, the novel is well-written and enjoyable. Carr effectively uses his experience as a Navy SEAL to write realistic action scenes that make readers feel like they are in the story, not just reading about it.

In the Blood: A Thriller (5) (Terminal List)
More info

In the Blood is the fifth book in the James Reece series, and it will be published in 2022.

A woman boards a plane in Burkina Faso, having just assassinated someone for the Israeli state. Her plane explodes two minutes later.

Former Navy SEAL James Reece remembers a Mossad operative from years ago in Iraq- a woman with ties to the intelligence services of two nations. So when he sees her picture on cable news as one of the victims of the plane explosion, he starts investigating her death.

He enlists friends from all over the world to help him track down her killer, not realizing that he’s walking into a trap.

Gracie Dwarf and the Storm Elves is a children’s book written by Jack Carr published in 2015.

The book follows Gracie Dwarf, a young girl who befriends the Storm Elves, a group of fairies who live in the forest. The Storm Elves help her to save it.

The book is written in simple language that is easy for children to read and understand. The story is engaging, and the characters are likable.

It teaches about friendship, cooperation, and helping others. In addition to teaching values, the novels also teach kids about different cultures and lifestyles.