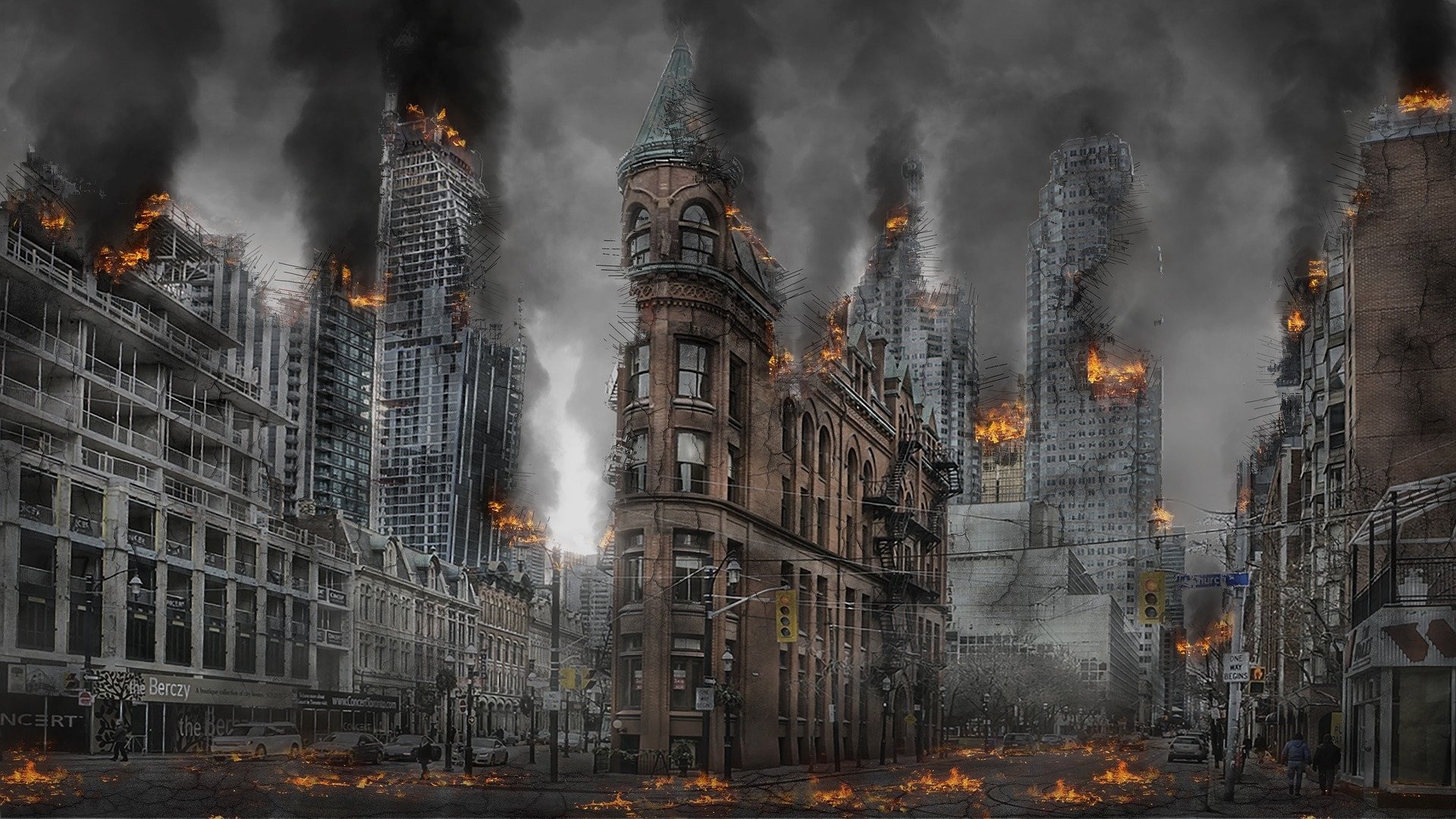 Post-apocalyptic fiction are works of literature in which civilization comes to an end. They are terrifying tales of suffering and agony to the world’s population.

The apocalypse events vary from runaway climatic changes and conditions to man-made events such as nuclear warfare and medical experiments that result in harmful viruses and plagues.

Such tales and horrifying, yet we still find ourselves attracted to them. The end of the world is a myth that none of us comprehends and this is what makes post-apocalyptic novels very fascinating.

The market is flooded with post-apocalyptic books and this makes finding the best of them really difficult, but our guide will simplify the search for you.

What to Look For

Choose to read those novels with the highest reviews and ratings. This applies if it is the first time you are buying post-apocalyptic books.

The story kicks off with the unexpected return of Robert McClane. The reason for his return is unknown and this leaves his family doubting his motives.

Reagan is still weary of her father’s actions and avoids any attempts to bond. The fact that he has brought with him a deadly disease makes Reagan distrust him even further.

Elsewhere in the set, the McClane discovers that there is something wrong with their town. A man walks into the clinic in need of sustenance for the upcoming winter months.

But is he what he claims to be or is he just pretending so that he can be welcomed and when people least expects it he unleashes harm and terror onto the people of this small town?

What follows next is a classic tale of survival against all odds. Hearts will be broken and hidden truths will be unearthed as a society seeks sustenance in the harshest of environments.

Character development in this novel is done in a manner so excellent that you will feel part of the McClanes. The story is captivating and you will be hooked from the very first page to the last.

It is now evident why The McClane Apocalypse Book Six is one of the best post-apocalyptic books published. Get yourself a copy today and experience post-apocalyptic fiction in a whole new light.

Unexpected World: The EMP Survivor Series Book 1 is a compelling tale of survival and steadfast determination to succeed in a failing world.

The lead actor in this story is assistant district attorney Dillon Stockdale. He is on the phone with his daughter when an electromagnetic pulse strikes the entire electrical grid of the United States.

Everything that relies on a computer is fried up including the plane that his daughter is on. The plane crash lands in the dangerous landscape of Louisiana’s Atchafalaya Basin and Dillon is forced deep into the woods to rescue her before things get worse.

Dillon is well prepared and armed to deal with all the challenges as he tries to rescue his daughter. The challenges he encounters are beyond his wildest expectations and they threaten to make his efforts futile.

The story is told in a captivating and enticing manner that will leave you entertained and thrilled. It is full of action-packed scenes that get your adrenaline going and yearning for more of the action.

Chris Pike captures our minds and heart with this post-apocalyptic novel in a manner not witnessed before. This book is one of my personal favourites when it comes to post-apocalyptic literature and I would recommend it to anyone looking for a good read.

Hugh Howey is one of the finest post-apocalyptic authors of our time and his writing prowess is best portrayed in the novel Wool.

A community exists in a toxic and ruined future. They live in a giant silo underground. Their  living is highly regulated world. They have been tuned to believe that the rules exist to protect them but is that really the case?

All these challenges when a guy by the name Sheriff Holston asks to go outside. This is really unexpected as it is considered taboo to make such a request.

What the silo is experiencing is an Uprising. It shakes the silo down to its core and how they cope after this is any ones guess.

The plot develops nicely and you are bound to fall in love with the novel from start to end.

Times are tough under the supertech coalition government. The fortune colonist are captured and enslaved so as to harvest the highly potent brain-enhancing drug Yolk.

The results of this process are highly catastrophic with multitudes losing their sanity and lives in the process.

The population dwindles and the highly ambitious government is still intent on extracting as much yolk as possible.

There is hope at last as a revolution is brewing from them most unlikely of sources. A band of 5 rebels launch a violent uprising against the government and they give their all to ensure that order is restored in the society.

Their uprising is met head on by the government forces in the form of Nephyrs, the government’s elite army of sadistic. The story is captivating and full of twists and turns that will leave you amazed and entertained.

For more on this story grab yourself a copy of Fortune’s Rising (Outer Bounds).

One Second After (A John Matherson Novel, 1)
More info

Of all the post-apocalyptic novels in the market none is better than One Second After (A John Matherson Novel).

It tells the story of one man struggling to save his family after America losses a war. This is one war that threatens to take America back to the dark ages.

The war is based on a powerful weapon that can bring doom to the entire human population should it fall in the wrong hands.

The weapon in this case is an electromagnetic pulse (EMP).

If you are looking for a good post-apocalyptic novel then you should definitely get a copy of One Second After (A John Matherson Novel).

6. The Atlantis Plague: A Thriller

The book is about a group of scientists trying to stop a plague from destroying the world. The members of this group have to use their intelligence and skills to figure out how they can get rid of this plague before it does too much damage.

They thought that maybe the cause was an alien race called Atlanteans (Earth-ancient aliens on Atlantis) who had a science lab underground. It kept saying “Atlantis”. So that is where they were from. It had information about genetic engineering and cloning, which proved to be helpful with the plague.

They ended up figuring out that this disease was …

This book involves many different concepts that are spread throughout the book. This includes science-based and historical facts that keep you interested in the book.

The historical facts in the story are also important because they go along with the main topic and make it seem more realistic, which helps keep your interest in the book.

The book is about a twenty-year-old boy, Ethan Jones, who lives in a post-apocalyptic society that has been struck by nuclear radiation. The society forces people with any mutations to be killed, so they don’t become the new human race.

The book is set when there was a lot of radiation going around, so they have always to make sure people with mutations don’t mix in with others.

He meets a girl from Japan, and he keeps her secret when she breaks a rule in town, which leads to them being outcasts from the community. They both go on an adventure and are faced with many different problems that test their limits.

The main conflict happens when there’s an incident with the Skel (a race/group that captures mutants) when people start getting attacked, and some people are taken away to use as bait to lure out mutants. The main problem is mainly about fighting, which leads up to what happens next.

I think Forager was a very action-packed, intense book. The book has action from the start to the end, and it doesn’t stop there. It is filled with a lot of suspense and surprise.

The book is about an attack that takes out nearly all of New York and the world’s communication. The book is written to show how a person would feel if they were in that situation. It starts by introducing the main character Mike Mitchell and his family.

The book also shows how destructive a person can be when their family is at risk.

This book is well known for being a modern suspense thriller, which does not contain too much violence.

This book has many different themes, such as patriotism, love, and hope.

9. The Girl With All the Gifts

The Girl With All the Gifts
More info

The Girl with All the Gifts is about a girl named Melanie who is only seven years old. She is very smart and gets bored in class, so she gets into trouble. The sergeant locks her up every morning in her cell.

The book is about “hungries” that attack people and make them ill. They do not remember being alive, but they want to eat you. Melanie has to learn to survive in the new world without losing what she cares about most… Sergeant, Miss Justineau, and herself.

I would recommend this book because it was an interesting read.

The Road by Cormac McCarthy is about a father and son’s fight to survive. They are walking alone through the burned world and leaving nothing but ashes in their tracks. It is cold enough to crack stones, and it is dark when the snow falls. They have nothing left, just a pistol to defend themselves against lawless bands that stalk the road.

The story is like no other, but what can you expect from a book about survival? It does not have an easy ending, but it never promised one. Even so, it does not leave you with anything. Instead, the story is a quiet look into the relationship between a father and his son as it outlasts the end of their world in every sense.

Many people are fascinated by post-apocalyptic stories because we wonder what would happen if some catastrophic event suddenly changed everything we know. This piece often features strong characters who overcome incredible odds and fight to survive in sometimes harsh environments.

The Road is an unforgettable read that will stick with you for years afterward. I would recommend this book to anyone who can deal with bleak situations without flinching.