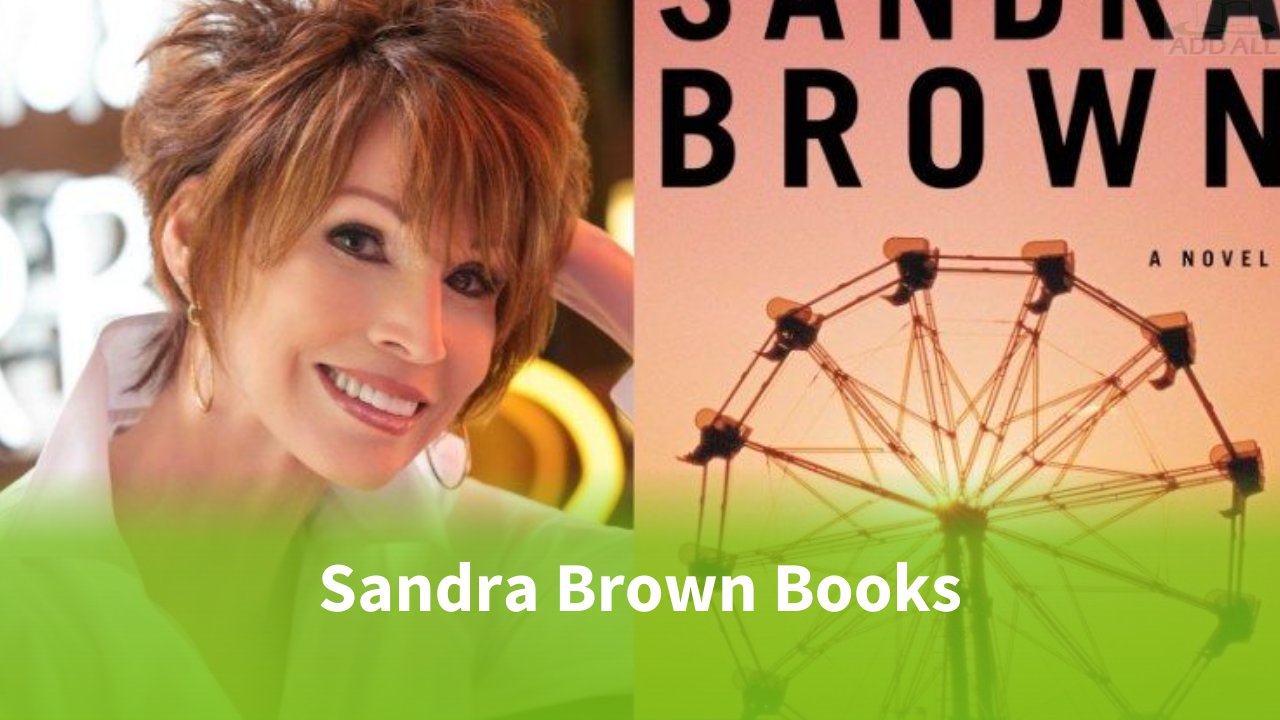 Sandra Brown writes thrilling and chilling suspense novels available in 33 languages. She has written more than 70 bestselling books, including drama, romance, crime, and action. Her books have received several awards and have sold over 80 million copies worldwide.

Brown has featured on the New York Times Bestseller list more than 50 times. Some of her stories have been made into television shows and movies, and she has also appeared in some TV series. Brown started writing in 1981; her first love novel was published in the same year.

Most of her characters are opposite to each other. However, they are forced to unite under deadly situations and are attracted to each other towards the end. Her books will undoubtedly leave you breathless in many ways with her excellent storytelling and memorable characters.

Here you will find 10 of the best novels written by Sandra Brown as per reader reviews. This article will make it easier to choose famous Sandra Brown books. All her stories are separate, which means you can take any of them without thinking about the order.

Sandra Brown is a successful American author of romantic suspense novels. Many of her more than 50 books have been on the New York Times Best Seller list, some more than once.

She has also written under several other pseudonyms of Rachel Ryan, Laura Jordan, and Erin St. Claire.

Brown has said that she is “a storyteller, not a researcher” and often makes up her stories as she goes along. Her novels are known for their sexy romance, mystery, suspense, and witty banter.

Since being on the market, Brown has successfully remained relevant by adding more novels to her repertoire, including many popular fiction books written under Erin St. Claire. Later, she took an exotic turn writing romances set in various locations worldwide, such as Europe and Africa.

Many of her novels are set in different cities, such as San Antonio and Dallas, during their respective historical periods.

Brown was born in West Texas in 1948. She met her future husband while studying in college and left college early to get married. Brown started writing as a hobby and published her first book in 1981.

Brown is active with several charities that deal with child abuse victims.

Dr. Emory Charbonneau is a keen marathon runner and an expert pediatrician. However, her talents cannot help her when she is lost in the mountains in North Carolina. This happens just after she has argued with Jeff, her husband.

However, when he reports that his wife has been missing, the trail has gone cold with ice and fog in the mountain wilderness, and the FBI freezes its search. It suspects Jeff to be the culprit behind all of this, who wants “instant divorce.”

When Emory wakes up, she finds that she has been kidnapped by a strange man who does not have a name, phone, or friends. Emory has to depend on her rescuer since she is isolated and wounded. With time, her difficulties increase, and she has to make some of the most challenging choices of her life to escape her abductor and survive.

This New York Times bestselling thriller comprises powerful storytelling and nail-biting suspense. It is also one of the most popular books of Brown that has made her a renowned author worldwide. Mean Streak is a compelling novel about deceit, love, and the choices we have to make when we are in danger.

Three people, two friends and a young woman, go on a boat for a fun night together, but only one returns. So when famous book editor Mavis Matherly-Reed reads this story in an unsolicited partial manuscript with blockbuster potential, she is instantly intrigued to meet its mysterious author identified only by his initials, Parker Evans.

Reed is a bestselling author’s wife and a publisher’s daughter. She travels from New York City to an obscure island in Georgia to meet the novelist who resides in ruins on a creepy cotton plantation. He tries to hide his identity and his past. However, after working with Parker, Mavis is attracted to him and worries about her marriage.

After she returns to New York, a few events make her think that this tale of betrayal is more real than fiction. She then tries to discover a shocking truth behind a hidden crime. But, unfortunately, this can put her life in danger as she might just be a pawn for someone who wants to take revenge.

A young mother, Honor Gillette, and a man charged with murder solve a corruption case in the Louisiana bayou while running from a dangerous search. Honor goes to her yard to help a sick man about whom her four-year-old daughter informs her.

This person is Lee Coburn, who has been accused of killing seven people the previous night. Lee has weapons and is dangerous. Nevertheless, she does whatever he asks of her. Since then, he will not hurt her and her daughter, and she has no other choice.

Coburn wants to get something that Gillette’s late husband had, which he claims is a precious treasure that can put both the mother and her daughter in danger. However, Honor soon finds out that she cannot even trust her friends.

She runs with Coburn to save their lives from the FBI offices in Washington D.C. to coastal Louisiana. Instead, they discover a web of depravity that can destroy the social order of society.

This bestselling book is about corruption, deception, and survival.

Recently divorced Lilly Martin accidentally strikes a person, Ben Tierney, with her vehicle to reach home before she is caught in a brutal blizzard. She was in Cleary, North Carolina, to sell her mountain cabin.

Ben is injured in a car accident. Due to this, both of them have to wait out the storm in Lily’s cabin. Lilly identifies Ben as they had met last summer and finds him attractive and charming.

However, she also remembers that four females have gone missing in this sleepy mountain town in the last two years. Their bodies were not found, and there were no clues. Blue, a serial killer, who has kidnapped these women, leaves a blue ribbon at the place where each of these women was last seen.

After talking to Ben for a long time, Lilly doubts that Blue and Ben are the same. She then starts to worry about her safety.

You must read this suspense and mystery novel to determine how it ends.

This is a romantic historical fiction book written by Brown. Set in 1934 during the Great Depression, this story is about an independent single mother, Ella Baron, who turns her house into a boarding home in Dust Bowl, Texas.

Ella is kind and runs the boarding house very elegantly, due to which she is popular among her guests. Along with this, she also launders, cleans, cooks, and cares for her son, Solly, who is 10 years old. He is a sweet child but is demanding as he cannot speak, due to which other people in the town often give her advice.

When Ella has a room opening, the respected town doctor, Dr. Kincaid, makes her meet a brave and attractive person, Mr. David Rainwater, who is looking to stay somewhere. At first, she reluctantly allows him to stay. But, soon, bizarre things start happening, thus changing her world.

An idealistic public defender, Kendall Deaton, in South Carolina, finds out a chilling secret about her new spouse. This evidence can put her and her child at risk. After learning about this, she tries to escape but instead meets with a car accident.

This novel has a spine-tingling plot with a great storyline.

This was the number one bestselling book on the list of New York Times. In this story, an ambitious prosecutor officer, Hammond Cross, looks into a high-stakes murder case of an influential real estate tycoon, Lute Pettijohn, in Charleston. This sensational murder case gives a chance to Cross of becoming the subsequent district attorney of the city. But, this is only possible if he can find the killer.

In his investigation, Hammond finds out that many people want Pettijohn dead, amongst which the main suspect is a strange woman who is hiding something. Hammond has to face a moral dilemma to solve this case that makes him wonder if he was an alibi.

This story is about Kerra Bailey, a television journalist, who has just found a significant break in her career in the form of a lead. This lead was about the truth behind a Dallas hotel bombing several decades ago and the reserved military hero, Major Trapper. He was photographed by reporters that day while saving several lives.

After this incident, Trapper gave many speeches and interviews, but soon he went off the radar. Bailey wants to find out where Trapper has been for the last 25 years and why he vanishes suddenly. She takes the reluctant help of the national hero’s son so that she can interview Tapper and move up in her career.

But, she falls into a dangerous place with attraction, assassins, and betrayal. The interview is scheduled, but shooters target both Major Trapper and Kerra.

You need to read this story to know about these men, the people behind the bombing, and if Trapper knows something about them.

This book is about a strong, heartbroken female, Schyler Crandall, a powerful Louisiana tycoon’s adopted daughter. She visits her home in Heaven, Louisiana, to solve family crises. But, unfortunately, Crandall has forbidden passions, concealed family secrets, and a business on the edge of disaster.

To bring back peace to her place of birth, she must confront her past. She lives with her sister, Tricia, who is married to a handsome man.

This lighthearted suspense and action novel has an interesting storyline with great love scenes.

The life of Avery Daniels, a television reporter, is forever changed when she goes through plastic surgery after a plane crash. Her new face looks similar to Carol Rutledge, Tate Rutledge’s wife. He is a senatorial candidate and is part of a powerful Texas dynasty.

Avery has to take Carol’s place and live her life now to save Tate and learn who tried to kill him.

This exciting and compelling crime thriller is full of violent passions and desires with well-described characters. The suspense and romance in this story will capture the readers’ attention without disappointing them.