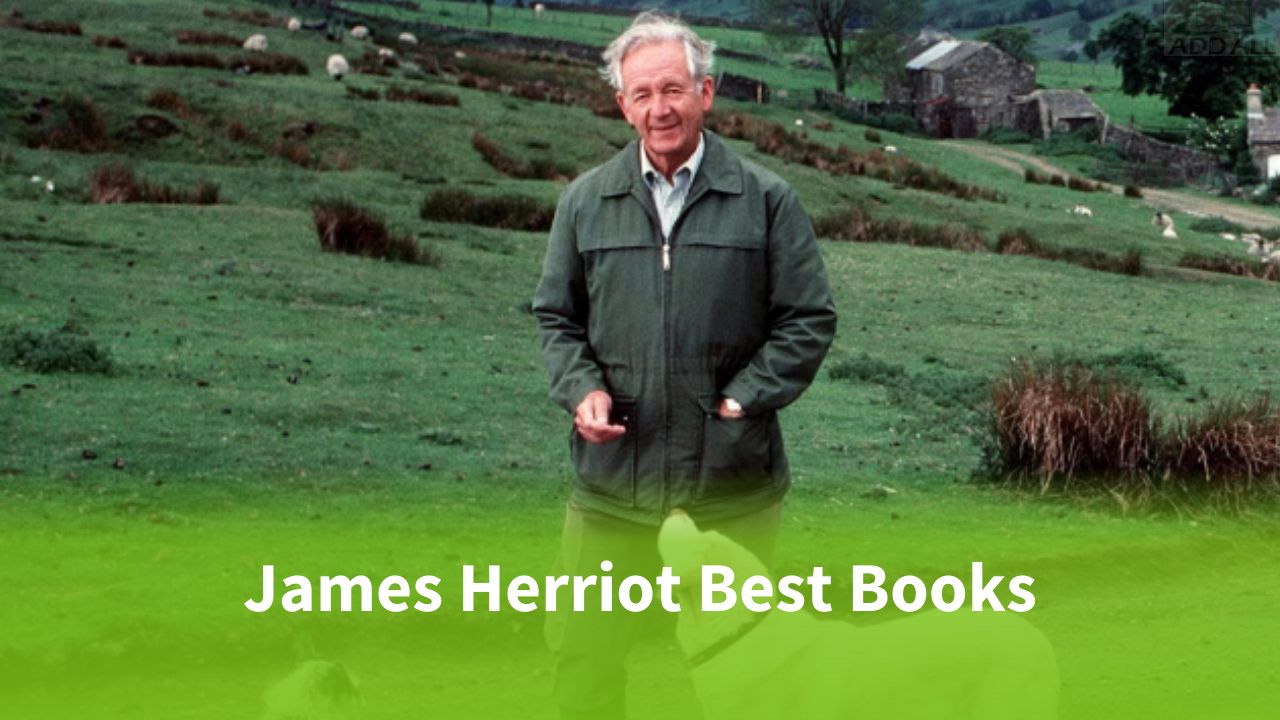 James Alfred Wight, known to his fans as James Herriot, was a British veterinary surgeon and writer. His books about the adventures while working in the Yorkshire Dales country during the 1930s are loved by many people worldwide.

All Creatures Great and Small Books In Publication Order

James Herriot was a British author who wrote about life as a veterinarian in Yorkshire, England, during the 1930s and 60s.

His books are collectively referred to as ‘The Herriot Way,’ based on their connection to All Creatures Great and Small and its sequels in the UK.

He worked as a veterinary surgeon until he became acquainted with Yorkshire farmer Donald Sinclair through church circles. When Donald fell ill due to an ulcerated tooth, James treated him and was later hired to work on several farms nearby where Donald lived.

If Only They Could Talk, James’ first book, was published in 1970. His books are still prevalent worldwide. The British television show All Creatures Great and Small are based on the Herriot books.

Based on real places and people, James Herriot’s writing style is easy to read and often includes humor, making it an excellent choice if you’re looking for light reading material after a long day at work or school. In addition, his detailed descriptions will give you a better sense of what it was like living in Yorkshire during that period and help immerse you further into his books. The Herriot Way is also a great choice if you like to read series instead of standalone novels.

Some people criticize James Herriot for writing very long stories with little happening. Still, many other readers appreciate the accurate and detailed descriptions that allow them to be transported back in time. The fact that he wrote about what it was like during that period helps paint a picture of the struggles farmers faced and how difficult veterinary medicine used to be compared to today.

1. All Creatures Great and Small

This book is a collection of real-life stories by James Herriot as a young veterinarian. He loves working with animals and has many great adventures with them.

In rural England, a vet encounters various animals and knows many interesting people. It’s educational and humorous because the author loves his work and is very enthusiastic when he tells stories about his life in Yorkshire during the 1930s. The book gives an inside look at what it was like to live in rural England back then.

It is not only about work; it’s also about his friends and family with whom he interacts during his work.

It’s well-written, humorous, and fascinating for people who like nonfiction or learning about other cultures.

This book was adapted into a BBC television series — All Creatures Great and Small — by the same name.

2. All Things Bright and Beautiful

This book was another collection of real-life stories about James Herriot’s work as a veterinarian in Yorkshire during the 1930s when he was in his 20s.

It provides an inside look at rural England with its beauty, friendship, love, hardships, etc. It contains interesting stories about animals, mainly dogs, cats, cows, chickens, horses, pigs, and sheep.

The author has many fun adventures because he loves animals so much. He treats them sympathetically at all times because he understands their pain even though they are animals. His love for animals becomes apparent when he describes how he interacts with them.

His experiences with people are also engaging. Some of them have unorthodox ways of treating their animals, but Herriot is very patient with all the different types he encounters.

3. All Things Wise and Wonderful

During the Second World War, James Herriot was called up to serve his country. He shares his experiences training with the Royal Air Force.

In this collection of moving and amusing episodes, James Herriot recounts his training with the Royal Air Force, misses his pregnant wife, and pays a visit home to see who keeps him so occupied at work.

He keeps himself busy as usual by caring for the animals who need him while going home to Yorkshire. Even though it is a difficult period for most people, Herriot has some fun adventures along the way too.

4. The Lord God Made Them All

James Herriot is happy that World War II is over, and he came back to his wife and family in the English countryside. However, he quickly finds himself on a new adventure as a supervisory veterinarian to Russia and later to Istanbul.

The book takes readers through James’ voyages to Klaipeda, Russia. I found it very entertaining and well written. I liked the many stories of the people and their unique culture. Humor and humanity are sprinkled throughout the book.

This is a collection of short humorous stories about dogs.

Over fifty uplifting dog-related stories will inspire you to appreciate your pet’s presence in your life even more. Because all animals are unique, James Herriot has to be creative when caring for them.

Dog owners might find it especially appealing because it gets you thinking about your dog or pet, and you will notice some things about your dog that you hadn’t known before.

James loves animals very much; he treats them with respect and affection, just as he does with all his work.

Every Living Thing is a book about Herriot’s life in the early 1960s as an older man treating more house pets than livestock. He is proud when his children like being veterinarians, and he applauds each new vet assistant’s talents and oddities.

There is no such thing as perfection in the healing profession because people and their pets are different. But Herriot demonstrates that no matter how little he can do for an animal or owner, the finest physicians are also the most empathetic.

This book is a collection of stories for Herriot. They were written over many years while James Herriot practiced veterinary medicine in rural England.

This is a collection of eight adorable animal tales for children of all ages. There are cats, dogs, a cow who always can find its way home, an aged horse, and a brave lamb who likes adventure.

All the stories are charming, and they teach kids about natural history while providing amusing anecdotes about the different relationships between humans and animals.

James Herriot’s Treasury for Children is a beautiful way to introduce school-age children to the joy of reading. The stories are fun, well-written, and educational — teaching kids about natural history while providing many amusing anecdotes about the relationship between humans and animals. Enjoy this treasury of eight animal tales that are also tender and touching.

This book is a collection of entertaining and amusing stories about cats, which all cat lovers can relate to!

The stories are heartwarming and hilarious at times. They give you the feeling of being there all along as he works with these different cats.

James Herriot’s Cat Stories is an excellent choice for children and adults alike, giving us the perfect opportunity to sit back, relax, and enjoy these wonderful stories about some cute and cuddly cats.

The author writes with humor, making it a pleasure to read, and has a serious message about how important it is to love and care for their pets.

Reading them sometimes reminds me of my pets when they act up, bringing back memories. It’s worth reading if you want to try a straightforward but delightful story for your kids or yourself.

9. If Only They Could Talk

If Only They Could Talk
More info

This is the first book in the series, and it tells the reader about James Herriot’s first job as a veterinarian. He learns how to deal with animals and their owners as he gains experience throughout his career.

When James Herriot, a recent veterinarian graduate, comes to the little Yorkshire village of Darrowby, he has no clue what new companions and adventures await him. This first volume of James Herriot’s first year as a rural vet is filled with his humor and charm.

This book is for anyone who appreciates laughter and pleasure in animals and enjoys appreciating wild regions and lovely countryside.

It is a reminder of the beauty and innocence that was once our wHerriot’ses Herriot has an attractive writing style, describing many adventures with animals in a fashion that everyone can understand without too much technical jargon. His sense of adventure is contagious, encouraging you to read on and not put the book down until it’s done.

This is the second book of James Herriot’s memoirs, telling about his further adventures in veterinary practice.

James Herriot writes the continuing story of his life as a veterinarian in Darrowby.

This book demonstrates that people are not always easy to deal with, but it is rewarding to come to terms with overall differences.

It is full of compassion and appreciation.

I like how James Herriot writes; he seems like a kind soul who wants everyone to It’salong with each other. This makes him an inspiration to children and adults alike throughout these memoirs!