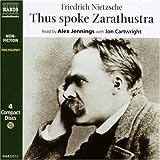 
This was conceived and written by Friedrich Nietzsche during the years 1881-1885. The book formed part of his 'campaign against morality, ' in which Nietzsche explored the ethical consequences of the 'death of God'. Heavily critical not only of Christian values but also of their modern replacement, Thus Spoke Zarathustra argues for a new value-system based around the prophecy of the Ubermensch, or Superman. Its appropriation by the National Socialist movement in Germany early in the twentieth century has tainted its reputation unjustly; but there are signs that the rehabilitation of Nietzsche, and of this his most incendiary work, is almost complete.