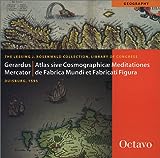 
Gerardus Mercator can confidently be called the greatest cartographer of the sixteenth century. His most famous contribution to science is a technique of rendering the globe on a flat surface, still known as "Mercator's projection," that was first used for a 1569 world map. No less significant was the publication in 1595, one year after the author's death, of the complete Atlas sive Cosmographicae meditationes de fabrica mundi et fabricati figura (Atlas, or Cosmographic Meditations on the Fabric of the World and the Figure of the Fabrick'd). With this volume, a collection of maps was linked for the first time with the figure of Atlas, the Greek Titan, condemned by Zeus to carry the vault of heaven on his shoulders. For Mercator, geographical description was more than the practical matter of locating places or showing how to get from one point to another. The cartographer was able to split the world in unfamiliar and uncomfortable ways, but he also had the means, through mathematical reasoning, to bind it up so that it approached a divine unity.

Although the idea of bringing maps together into a book did not originate with Mercator, he can certainly be called the first modern, scientific cartographer. His early charts, used with a magnetic compass (and an awareness of compass declination) gave the sailor the most reliable guide he had ever possessed. No one else could claim the breadth of his understanding of terrestrial magnetism and map projection. Mercator also published the first manual of the italic hand to be printed outside Italy; he used italic exclusively on his maps and it, too, has remained a staple of cartography up to the present day. This particular copy of Mercator's Atlas is exceptional for its beautiful hand-coloring.