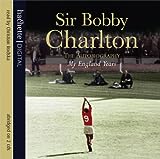 
Sir Bobby Charlton is widely acknowledged as the greatest player ever to wear an England shirt. He won a record number of caps and scored a record number of goals. Here, in the second volume of his bestselling autobiography, Sir Bobby talks in detail about his phenomenal career with England. During the 22 years he played for his country, he was involved in some of the greatest England games of all time, the 9 3 thrashing of Scotland, the 1962 and 1970 World Cup games against the Brazilians, the classic 1970 World Cup quarter final against West Germany, and, of course, the triumph of the 1966 World Cup. Here, for the very first time, Sir Bobby talks openly about his international career and his views on the game. From breaking into the squad at 21, to the highs of 66 and the lows of 70, his story encompasses drama, passion, goals, controversies, classic matches, world class players, and moments of soccer genius.