The Bard on the Brain: Understanding the Mind Through the Art of Shakespeare and the Science of Brain Imaging 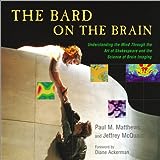 
More than 400 years after they were first written, Shakespeare's plays still offer a stunning glimpse into the motivations, desires, and deviancies of man. His characters are caught in situations modern readers can sympathize with, and his themes—love, family relations, adultery, power, treachery—are as relevant now as they were then. Surprisingly, another aspect of the Bard's work that has withstood the test of time is his understanding of the brain. The Bard on the Brain is a marvelous combination of close readings of Shakespeare and the most current neurological research that together demonstrate how impulses and actions originate in the brain.

Paul Matthews here shows us the center-stage role of the brain in famous scenes from Shakespeare's plays. With stunning color brain scans and clear English, Matthews demonstrates how uncannily Shakespeare perceived the brain at work in his characters' ideas and deeds, and how the living brain mirrors human experiences created centuries ago by the Bard. Matthews's science is beautifully interwoven with Jeffrey McQuain's interpretations of many of the most significant soliloquies in all of Shakespeare's plays. The Bard on the Brain is also illustrated throughout with performance photos of acclaimed British and American actors—such as Morgan Freeman as Petruchio, Sir Ian McKellen as Prospero, Alfre Woodard as Paulina, and Anthony Hopkins as King Lear—from celebrated Shakespeare companies. The result of this partnership between scientist and scholar is a unique view of Shakespeare's characters, a dissection of his language, and a wonderfully oblique perspective on the human brain.

The Bard on the Brain Reviews