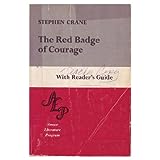 
Henry Fleming has joined the Union army because of his romantic ideas of military life, but soon finds himself in the middle of a battle against a regiment of Confederate soldiers. Terrified, Henry deserts his comrades. Upon returning to his regiment, he struggles with his shame as he tries to redeem himself and prove his courage.

The Red Badge of Courage is Stephen Crane’s second book, notable for its realism and the fact that Crane had never personally experienced battle. Crane drew heavy inspiration from Century Magazine, a periodical known for its articles about the American Civil War. However, he criticized the articles for their lack of emotional depth and decided to write a war novel of his own. The manuscript was first serialized in December 1894 by The Philadelphia Press and quickly won Crane international acclaim before he died in June 1900 at the age of 28.

The Red Badge of Courage With Reader's Guide Reviews