Private Soldiers: A Year in Iraq with a Wisconsin National Guard Unit 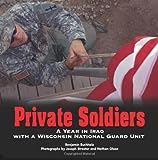 In April 2005 they received the official alert: The Wisconsin Army National Guard's 2-127th Infantry Battalion was being mobilized. After training at Camp Shelby, Mississippi, the 620 soldiers of the Gator Battalion would serve in Operation Iraqi Freedom, providing armed convoy escort and route security throughout all of Iraq, from Umm Qasr in the south to Mosul in the far north. Their mission would take them into the most dangerous regions of Iraq, and during the next year the battalion would withstand hundreds of attacks, see dozens wounded, and lose three members killed in action.
Private Soldiers chronicles the 2-127th's year-long deployment from the unique perspective of the soldiers themselves. Written and photographed by three battalion members, the book provides a rare first-hand account of war and life in Iraq. Fascinating soldier interviews reveal the effects of deployment on the troops and on their families back home, and interviews with Iraqi civilians describe the Iraqis' perceptions of life, war, and working alongside Wisconsin troops. Brilliant photography illuminates the 2-127th's year, from training to "boots on the ground" to their return home. And candid photos taken by battalion members capture the soldiers' day-to-day lives and camaraderie.
An extremely timely and relevant account of soldiers' lives, Private Soldiers honors Wisconsin's participants in the Iraq war and helps readers understand the war's human side.
All royalties from sales of Private Soldiers will go to the 2-127th's family support groups and to funds established in memoriam of the battalion members who gave their lives in the Iraq war.