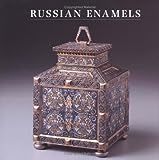 Within the late tenth century, Kiev produced enamelled liturgical and some secular objects that adhered to Byzantine traditions. During the course of the 17th century the Kremlin Armoury in Moscow and various northern trading centres emerged as major bases for the manufacture of both liturgical and secular enamels while the key to the programme of westernization initiated by Peter the Great in the early 18th century was the attraction of foreign artisans who brought their own techniques to the new capital of St. Petersburg. The nineteenth century closed with a dichotomy of styles: classicizing, courtly traditions that flourished in St. Petersburg, all of which were demonstrated in the art of the pre-eminent master, Carl Faberge. However, Moscow served as the heart of the Russian revival movement, and it is the vibrantly coloured and exotic-looking revival enamels that are so highly prized by collectors today.

Russia drew from many cultures to develop its own distinctive styles and methods of enamelling; its strategic location on the trade routes between western Europe and Asia, and between Scandinavia and the Byzantine and Islamic Near East was particularly relevant.

The enamels illustrated in this book are from three sources: Henry Walters, the founder of the gallery in Baltimore that bears his family's name, visited St Petersburg and patronized the firm of Carl Faberge in the summer of 1900, while Marjorie Merriweather Post's superb holdings of Russian and French 18th and 19th century decorative arts are housed in the Hillwood Museum in Washington D.C. The third source is a private collector who began exploring the entire range of subjects, styles and technoques of enamelling associated with the Russian revival movement.