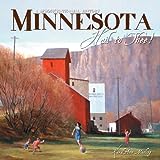 
In the summer of 1849, according to official count, fewer than 4,000 people lived in Minnesota. The tally did not include members of the Indian tribes who had called Minnesota home for generations. Nor was it clear at the time just what and where Minnesota was. Minnesota was no longer part of the Wisconsin Territory, which had ceased to exist when Wisconsin became a state. The Stillwater Convention was Minnesota's first step on the road to statehood. Nobody sanctioned (approved) the meeting. Nobody voted its delegates into office. They just boldly asserted their claim and sent Henry Hastings Sibley off to Washington as the first congressional representative from Minnesota. The bill creating the Minnesota Territory and making St. Paul its capital was signed into law in March 1849. Thank the Lord cried one Minnesota pioneer when word of the action trickled into the Mississippi Valley a month later. We live in the United States again Minnesota is culture and nature in happy alignment. Visitors to Minnesota who come with fishing rods and snowshoes are apt to be looking for nature, as Henry Sibley and Alexander Ramsey and Henry Schoolcraft saw it, at the very beginning, in the Boundary Waters Canoe Area, in its unspoiled splendor. Minnesota is past and present in happy alignment.