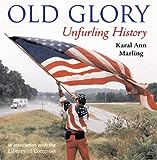 
The Continental Congress, meeting in Philadelphia in the winter of 1776, received an urgent message. Please fix upon some particular color for a flag. It was from an understandably exasperated George Washington. The Continental Armies had taken the field under a babble of emblems and devices. Even the Grand Union flag that flew over naval vessels confused the issue with its display of the crosses of the British flag in its canton. So, at Washington's request, Congress wrestled with the design, and on June 14, 1777, almost a year after the signing of Declaration of Independence, on the date still celebrated as Flag Day, the United States finally had a flag all its own. Every era has a flag story to tell. Suffragettes, Know-Nothings, babies, Boy Scouts, and the Ku Klux Klan have all claimed it as their own. It flies in moments of victory, on Iwo Jima during World War II, and in moments of profound sorrow, when America grieved for the victims of 9/11. Old Glory: Unfurling History describes the histories and myths surrounding the flag of the United States of America from its revolutionary birth to the present day, and is lavishly illustrated from the collections of the Library of Congress. Karal Ann Marling is professor of Art History and American Studies at the University of Minnesota. She has published extensively, and her recent books include: George Washington Slept Here, Graceland: Going Home with Elvis, and Illusions of Eden: Visions of the American Heartland.