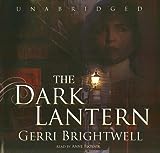 
London, 1893. Elderly Mrs. Bentley is on her deathbed, and her son Robert has returned from France. But in the Bentleys' well-appointed home, everyone has their secrets, including Robert's beautiful and elusive wife, the orphan maid she hires from the country, and the mysterious young woman who arrives, claiming to be the bride of Robert's drowned brother.Robert is quickly developing a reputation in anthropometry, the nascent science of identifying criminals by body measurements. Yet soon he is caught up in the deceptions swirling around him, for no one under his roof is quite what they seem. When an intruder enters the house and ransacks the study, a chain of events is set in motion that threatens not only the genteel, comfortable life the Bentleys have managed to secure but also their very survival.A fascinating portrayal of a vanished England as well as an unconventional mystery, The Dark Lantern exposes the grand upstairs; of a Victorian home and the darker underbelly of its servants' quarters. The clash between the classes makes for a suspenseful novel of mistaken identities, intriguing women, and dangerous deceptions. From the Hardcover edition.