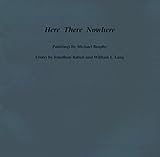 
Michael Brophy has painted the Pacific Northwest landscape for over two decades, from sumptuously rendered panoramas of clearcuts and slag heaps to comic-book-scaled noir tableaus of the characters who reshaped the region 150 years ago. This large-scale monograph brings 15 of his most historically expansive paintings to date together with writings on the artistic and cultural history of the Northwest landscape by essayist Jonathan Raban and historian William L. Lang. The influences on Brophy's painting stretch from Goya and Velasquez to Robert Colescott and Georg Baselitz. He has riffed on everything from obscure Wobbly songs to Chinook jargon dictionaries to the writings of Stewart Holbrook. But Here There Nowhere marks a bold new direction in Brophy's work. More sweeping in scope and minimalist in style, the paintings portray what he calls the "Big Empty," the dramatic, vacant spaces of the Northwest's eastern deserts and western coast but with an eye toward the coming endgame of Manifest Destiny. Raban's essay, Battleground of the Eye, traces two centuries of artistic conflict between the verdant, people-free Northwest most painters chose to portray vs. the fully populated and exploited landscape that actually existed. Lang's essay, An Insatiable Hunger: The Consuming Myth of the Northwest, probes the changing mythology of Pacific Northwest landscape as it has progressed from an apparently infinite resource for extractive industries to a playground for an expanding consumer class. Designer John Laursen has translated the sweeping power of Brophy's work to the scale of a 12-by-12-inch book with the 200-line reproductions imaged direct to plate and printed by Portland's award-winningMillcross Litho.