Spy Catcher The Candid Autobiography of a Senior Intelligence Officer 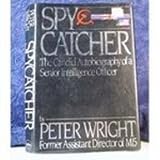 
The British government's efforts to block publication of Peter Wright's Spycatcher: Candid Autobiography of a Senior Intelligence Agent climaxed in a sensational trial in Australia in 1986 that cast a shadow of disrepute on the British legal system, the Official Secrets Act and the government itself. The author of this engrossing, suspenseful account is the Australian attorney who represented Wright and his would-be Australian publisher. Excerpts from the trial testimony reveal that Turnbull uncovered mendacity, hypocrisy and cynicism at the highest levels of the British government, principally during his cross-examination of Sir Robert Armstrong, cabinet secretary and adviser on intelligence matters. In 1987 the High Court at Canberra dismissed the case and ordered the Thatcher government to reimburse legal costs to Wright and Heinemann Publishers Australia. Turnbull calls the Britishers' conduct in the affair "quite disgraceful" and adds that the experience "galvanized my determination to see Australia rid herself of its sic remaining constitutional links with England."