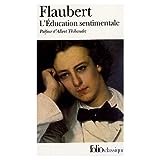 
"I want to write the moral history of the men of my generation—or, more accurately, the history of their feelings," declared Gustave Flaubert, who envisioned "a book about love, about passion; but passion such as can exist nowadays—that is to say, inactive." First published in 1869, this novel fulfills Flaubert's conception with a realistic, ironic portrait of bourgeois lives played out against France's tumultuous revolution of 1848 and the founding of its Second Empire.

Frédéric Moreau, a law student in Paris, dreams of achieving success in art, business, journalism, and politics. His aspirations take a romantic turn upon a chance encounter with a married woman, who inspires a lifelong obsession. Frédéric befriends his idol's husband, an influential art dealer, and quickly finds himself seduced by society life—and bedeviled by financial problems, ideological conflicts, and betrayals of trust. Blending romance, historical authenticity, and satire, Flaubert's Sentimental Education ranks among the nineteenth century's great novels.