DEFinition: The Art and Design of Hip-Hop 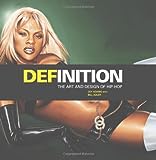 
Compiled by legendary hip-hop designer Cey Adams, DEFinition: The Art and Design of Hip-Hop is the first comprehensive anthology published in the name of the genre during the last thirty-five years. This landmark volume celebrates a culture that has made its mark on everything from fine art to the label on a bottle of Hawaiian Punch, including fashion, automobiles, movies, television, advertising, and sneakers. It highlights the careers and artwork of such crucial hip-hop elders as Lady Pink, Haze, Run-DMC, Dapper Dan, Buddy Esquire, Spike Lee, and Snoop Dogg as well as contemporary giants like Kehinde Wiley, Mr. Cartoon, Shepard Fairey, Dalek, Mike Thompson, Jor One, and Claw Money, and dozens of others, DEFinition examines the evolution of hip-hop as a visual phenomenon with the historical depth that only an insider like Cey Adams can provide. Featuring more than 200 stunning photographs and illustrations as well as compelling essays by some of hip-hop's most seasoned voices, DEFinition illuminates the culture in a form that speaks to aficionados and newcomers alike.