One of the challenges of being a mystery writer these days, is that the early generations who created the genre were so fiendishly good. Agatha Christie, Arthur Canon Doyle, Dorothy Sayers, Dashell Hammett, Ross McDonald and company are simply a hard act to follow – not to mention Raymond Chandler, who in my opinion is the best of the lot, at least among the Americans. By comparison, the stuff that comes out today often seems very second-rate, recycled material, the same bodies and usual suspects that we have encountered earlier in more skillful hands. 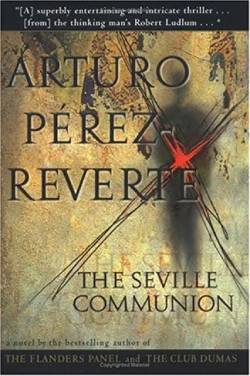 If you’ve ever despaired, as I have, that everything good in the suspense genre has already been written, you might take a look at Spain’s most famous living writer, Arturo Pèrez-Reverte, whose work is translated into English, along with eighteen other languages. His books are mystery/thrillers, but a lot more. They tend to be elaborate intellectual puzzles, morality plays in which, as an extra offering, the reader learns a great deal about various subjects, ranging from the art of fencing (The Fencing Master; ISBN 0-15600684-7) to Flemish art (The Flanders Panel; ISBN 0-55337786-8), and even obscure biographical details about the great potboiler author of The Three Musketeers, Alexander Dumas, in the The Club Dumas; ISBN 0-67977754-7.

Arturo Pèrez-Reverte is without doubt the most intellectual novelist to try his hand at the mystery-thriller since Umberto Ecco’s The Name of the Rose. I just finished The Seville Communion , which is a good example of how Arturo Pèrez-Reverte has stretched the genre. The story starts with a hacker breaking into the Vatican’s computer system, getting through to the Pope’s personal email with a plea to save a church in Seville that is slated for demolition. There have been several deaths recently in the church – murder or accident, it is not clear. The Pope becomes personally interested in the situation and the Vatican sends its best and most discreet sleuth, Father Lorenzo Quart, to find out what is going on. So far this is a clever, fairly standard thriller opening; but from here on, the novel launches into deeper territory. In Seville, Father Quart finds many unexpected things: beauty, faith, greed, a seductive smell of oranges in the air, and a beautiful woman who makes his vow of chastity problematical.

Father Quart is part James Bond and part Hamlet, an interesting mix – a thinking man’s action hero. In mystery writing workshops I’ve taught recently, I like to point out that the detective novel is a serious literary device. A detective hero, after all, is a person who risks his or her life to discover the truth of a situation, often standing alone against the tide of common opinion. It seems sad that the majority of today’s mystery authors are so tame and mechanical, content to repeat the formula, when there are many exciting possibilities inherent in the quest – yes, to find the killer, but in so doing, discover some truth about human nature, and the often corrupt societies in which we live.

Arturo Pèrez-Reverte is the exception; he is an original voice, something new. He isn’t for everyone – I know readers who find him just a little too brainy and slow moving. But if you’re bored with the usual ironic P.I., he may be your man. You won’t guess the endings, at least, and the usual suspects aren’t very usual at all.

The most recent Arturo Pèrez-Reverte novel, incidentally, is The Nautical Chart , pubished in hardcover by Harcourt Brace, New York; ISBN 0-15-100769-1 an interesting book which I ll be reviewing this in a future column.