Michael Pollan: The Botany of Desire

As humans, we take ourselves fairly seriously, imaging we are in charge of the world around us. One of the pivotal moments in our history, anthropologists like to say, is when mankind learned to domesticate plants, becoming farmers instead of hunter-gatherers, thereby insuring a steady food supply and giving birth to settled communities. Higher civilization itself, you might say, began when people learned to farm.

It’s a nice story. Heroic in its way, man over nature. But what if instead of controlling plants, it’s the other way around – plants manipulating us, satisfying our needs so that we will do their bidding, which is to aid them in their endless quest to propagate? This, at least, is the highly original notion of Michael Pollan in his intriguing book, The Botany of Desire Pollan’s thesis in a nutshell (and his name is rather appropriate here), is that we are human bumblebees of a sort, lured by our desires to seminate seeds and further the evolutionary whims of plants in a reciprocal dance in which they are every bit as much in charge as we, evolutionarily speaking. 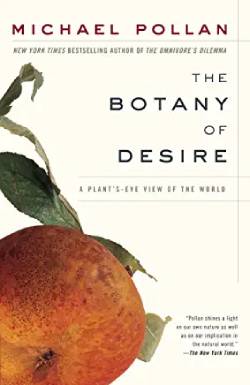 To illustrate his point, Michael Pollan gives us the history of four common plants that have greatly affected mankind: the apple, the tulip, marijuana, and the potato. The history of each of these species is fascinating. We learn, for example, that John Chapman (a.k.a., Johnny Appleseed) floated down the Ohio River with sacks of apple seeds, growing wealthy on the new frontier’s need for sweetness – sugar, we discover, wasn’t readily available to common people until late in the 19th century, so fruit had to substitute for Godiva chocolate. As for the apple, the people of the frontier had other needs besides a well-balanced diet: apples from Johnny Appleseed’s trees were crushed rather than eaten in order to make hard cider. Booze, in short, without which the American West would have been a dry place indeed.

How many of you know that three centuries ago, tulips, those most beautiful of flowers, were traded on the Dutch stock exchange, and that “tulipmania” nearly brought Holland’s economy to a ruin? Potatoes, of course, were the New World’s gift to the Old World, and created a vast new food supply that greatly increased the population of Europe, and made the industrial revolution possible. As for marijuana . . . well, how would we have had the 1960s otherwise? Michael Pollan shows how each of these plants satisfied basic human desires, and in so doing, ensured their own survival. Which is what nature is all about.

The Botany of Desire is part history, part memoir, part science – and all of it is extremely well-written, almost fiendishly interesting from the first page to the last. Pollan is a contributing writer to The New York Times Magazine and the author of two prize-winning books: Second Nature: A Gardener’s Education and A Place of my Own: The Education of an Amateur Builder I highly recommend “The Botany of Desire” to anyone who has ever puttered about in a flower bed and wondered about the astonishing mystery.

Other books by Michael Pollan