Back in my youth, I was a big fan of science fiction: Jules Verne, Robert Heinlein, Ray Bradbury, Arthur C. Clark, Frank Herbert, Isaac Asimov, and company, the early greats. Then something happened. The genre changed. Perhaps it was since the world had become vastly more complex and the future not so much fun to contemplate. Science fiction seemed to take on a retro, pseudo-medieval quality, stories full of knights and sorcerers, fantasy tales that didn’t seem to be much like science fiction at all. I guess I’m old fashioned. When I think of science fiction, I want rocket ships to distant planets. I want ray guns and little green men.

My wife Gail recently brought home The Sparrow by Mary Doria Russell, the 1996 novel published in paperback by Fawcett Columbine that is already a cult classic. It’s the sort of book that if you carry it in public, people are apt to come up with you to ask if you love it as much as they did. Probably there hasn’t been a science fiction novel since Robert Heinlein’s “Stranger in a Strange Land” that so transcends the genre into heady realms of philosophical speculation. Mary Doria Russell has a Ph.D. in biological anthropology as well as a vast knowledge of theology, and her debut novel is a quest into the nature of good and evil and the existence of God.

The plot of The Sparrow is relatively simple and owes perhaps a small nod to Carl Sagan’s “Contact.” In 2019, a radio astronomer in Puerto Rico received a signal from an alien planet, a transmission that sounds suspiciously like music. A lovely, celestial song encourages a small group of Jesuits and several non-Jesuit scientist friends to make a private expedition to a nearby galaxy to contact the alien species. 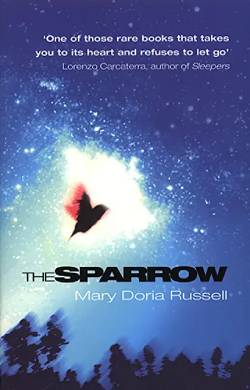 The story goes back in forth in time and space, from the ongoing expedition in 2019 to the expedition’s sole survivor at the end of the journey, the Jesuit priest Emilio Sandoz, who has returned to Earth in the year 2059 and is in terrible shape, physically and emotionally tortured from his experience. For me, this was a bit clumsy as a narrative device; we get the story backward and forwards, from Emilio as his Vatican superiors are debriefing him, and in real-time as the group lands at last on the planet Rakhat and explores the mysteries of the alien civilization.

It takes the author nearly 200 pages before the Earthlings arrive on the planet Rakhat, where the story’s main body begins. There are some tedious sections in the first half of the book. Still, once she has us on Rakhat, it’s as though suddenly Mary Doria Russell, novice novelist, has figured out how to write. From here on, the book is fascinating.

The best part of The Sparrow is Russell’s depiction of the alien culture, subtle matters of customs and prejudice, and eating habits that throw an interesting light on our terrestrial mores. Quite innocently, meaning only to be helpful, the visitors from Earth disrupt the new planet’s ecological balance and create a terrible evil that results in bloodshed. In the end, the sole survivor of this disaster, Emilio Sandoz, must face the consequences of his actions and find an expanded definition of God, and a divine plan that includes suffering and evil.

The Sparrow is not a masterpiece; for me, there were serious flaws. But it was the sort of story where the author’s enthusiasm to say something important transcends the writing itself, and you will be left thinking about her ideas long after you close the last page. In its way, this is an original, delightful book – the best science fiction I’ve read in years. There were no ray guns, I’m sorry to say, and the aliens were not green, but at least they had nifty tails and the most exciting sex lives you are likely to encounter this side of Alpha Centauri.