My Favorite Cookbooks and Foods

I heard recently on the news that supermarkets are losing market share in the U.S. and industrialized countries abroad to businesses that sell prepared meals, packaged foods which one can pop into the microwave. In the very busy world in which we live, people simply don’t have the time to cook.

Personally, I believe that cooking is one of the great relaxing pleasures of life and that this trend of culinary convenience is nothing short of tragic. Like most people these days, I spend my working life in front of a computer – I am a novelist, you may be an accountant or a scientist, but it boils down to the same thing. Heavy sitting, hour after hour, staring at a video display, to end up with a fried brain – to feel cooked, in short, in the worst possible meaning of the term. How splendid it is therefore to stand from my desk, stretch, and wander into my kitchen to pull onions and vegetables out of the bin, sharpen my chef’s knife, perhaps pour myself a glass of wine, put some Brahms or Beethoven on the stereo . . . mindlessly mince, mix, and simmer, and throw together a few calories to repair my tattered body and soul. 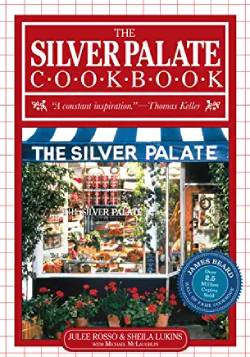 I enjoy improvising, but when inspiration flags, it’s nice to have a really decadent cookbook or two. My favorite cookbooks these days remain the groundbreaking work from Julee Rosso and Sheila Lukins, the owners of The Silver Palate, a gourmet delicattessen on Amersterdam Avenue in New York City, who popularized “nouvelle” cuisine in the late 1970s, altering the American diet. The first book they put out was The Silver Palate Cookbook , from Workman Publishing in 1979 (ISBN: 0-89480-204-6), an intriguing collection of menus, tips, and food lore – a book that will make your chloresterol level jump simply to hold it in your hands. 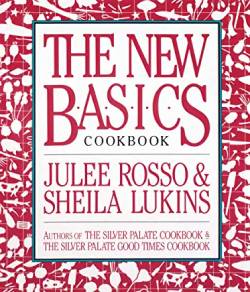 Do you have room for more? Good, because Julee Rosso and Sheila Lukins' main opus, The New Basics Cookbook , came out in 1989, also from Workman Publishing (ISBN: 089480-392-1), and it is truly the essential cookbook for the new gourmet, thicker and broader in scope than their earlier work. One of the real breakthroughs is their use of fruit in cooking – game hens stuffed with apricots, for instance, then torched with brandy just before serving. Probably you will not dine in this fashion every night, but it’s hugely fun to do so every now and then, as a special treat. I always do my Thanksgiving turkey straight out of the New Basics. The stuffing is fabulous, starting with bread cubes and then adding onions, celery, a pound of country pork sausage, two tart apples, a cup of hazelnuts, a cup of dried cherries, thyme, sage, chicken stock, and a cup of tawny port just so none of your guests suffer from the culinary blahs. 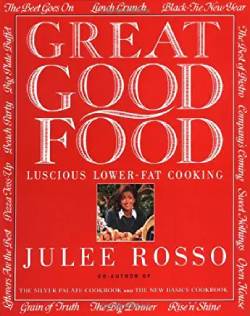 You get the idea. All the recipes are elaborate but easy to follow and emphasize fresh, natural ingredients. You will get fat, certainly, if you dip into these books too often – but at least you can tell yourself that it is healthy fat, of the very highest quality. One of the author’s, Julle Rosso, tried to come up with a healthier volume in 1993, Great Good Food: Luscious Lower-Fat Cooking , this one published by Crown (ISBN: 0-517-88122-5. Most people I know, however, have found this volume something of a letdown, anticlimactic after the caloric splurge of the earlier books – antipasto too, most likely – and not even entirely dietetic.

Better to go whole-hog, I say. Every civilized person should have The New Basics Cookbook lurking somewhere on their kitchen shelf. You can always join a health club next week. Meanwhile, oink-oink.

If you know Honolulu, you will probably know the name Keo Sananikone, king of Thai cuisine in Hawaii. Keo Sananikone, who holds a degree in architecture from the University of Washington, opened his first Honolulu restaurant in 1977, “Mekong,” which was so successful he soon opened “Mekong II,” and finally the famous Keo’s Thai Cuisine on Kapahulu Avenue, a strikingly attractive restaurant filled with a jungle of plants and colored umbrellas, a feast for the eye as well as the palate. 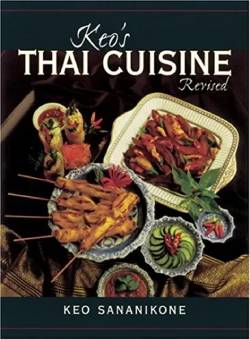 When my wife and I lived on Oahu in the mid-1980s, we used to go to Keo Sananikone’s for every special occasion we could dream up, making the drive over the Pali Highway from where we were living on the windward side of the island. The first thing we’d do, while browsing the list of appetizers, was order a round of mango daiquiris – it’s thirsty work trying to decide between Bangkok Stuffed Wings and Crisp Fried Crab Claws. Frankly, a mango daiquiri is to die for. Here’s how it’s made, courtesy of Keo’s Thai Cuisine , the book rather than the restaurant, first published in 1985, revised and republished in 1999.

For two drinks, combine in a blender 2 ounces of light rum, 1 large mango (peeled and seeded), 1 tablespoon fresh lemon juice, and a teaspoon of sugar. Blend at a high speed for 30 seconds, gradually adding a scoop of cracked ice. Drink without further delay.

You are now ready for Thai cooking, de-mystified and often remarkably quick and easy. Keo Sananikone begins his wonderful cookbook with a glossary of commonly used ingredients in Thai cuisine, and how to use them. We learn, for instance, that kaffir lime leaves take eight to ten years to mature on a plant and that you can substitute bay leaves if your local Asian market doesn’t carry them. Or there’s lemon grass, also called citronella, an herb that provides a distinctive lemony flavor; to prepare fresh, crush the lower part of the stalk, then chop them finely . . . or substitute the zest of half a lemon. 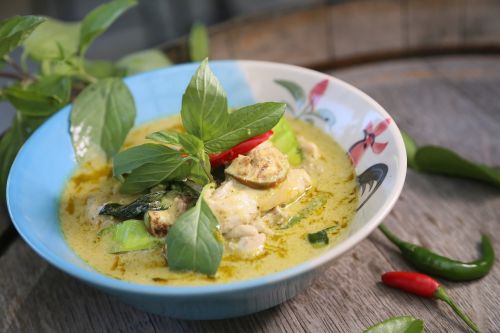 Sadly, I live far from Hawaii today, and far from Asian grocery markets, so I’m grateful for this mention of substitute possibilities. Kaffir lime leaves may stump eager gourmets like me who live in remote places, but most of the other ingredients you will need – curry paste, fish oil, coconut milk, etc. – can be found today in the Oriental section of any large supermarket. The rest is easy: Sa-Teh On Skewers, Son-in-Law Eggs, Calamari Salad with Fresh Lemon Grass, Lobster with Pineapple, Thai Roast Duck, Cashew Chicken, Beef With Fresh Sweet Basil . . . Keo Sananikone makes all these dishes and more possible to the home chef. And when you’re really good, you can try “Evil Jungle Prince with Mixed Vegetables,” or even make your own green curry paste from scratch.

Good cookbooks do more than provide specific recipes, they give you the general idea of a cuisine with room to improvise. My own personal favorite of Keo’s Thai Cuisine is the curry section. With a few tablespoons of curry paste (red or green) and coconut milk, a whole world of possibilities soon opens up – add mushrooms, shrimp, chicken, tofu, snow peas, cashews, a red pepper, zucchini, anything at all, a Thai stirfry extravaganza depending on your mood.

Keo Sananikone’s cookbook is perfect for anyone, like me, who wants to get started on Thai cooking and learn the basics of one of our planet’s most deliciously intriguing cuisines. And don’t forget those mango daiquiris to inspire a Bangkok frame of mind!

The Book of Sushi

Either you love it, or you hate it. Sushi, that is. Raw fish, seaweed, sticky rice, soy sauce, and wasabi. I have a brother-in-law from the Midwest who positively gags at the very thought of such weirdness, food that isn’t even cooked! . . . and of course I’m always threatening to make him eat sushi when he visits, a small cultural war that we play. 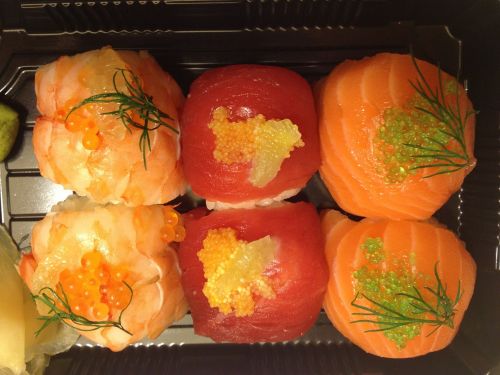 Personally, I love the stuff. I’m an addict, I can gobble up huge amounts of nigiri sushi, whether it’s fresh raw tuna, octopus, salmon, clams, or sea bass – I’m a true democrat when it comes to fresh-caught fish from the sea. Equally delicious, and less expensive in restaurants, is nori-maki, seaweed rolls – California rolls are my particular downfall, with the rice on the outside and inside a filling of crab and avocado. I’m not sure if I can explain precisely why I like sushi so much, whether it’s the texture or the taste, or the fiendishly hot green Japanese horseradish, wasabi, that works like a heat-seeking missile straight to the brain. Suffice it to say that for a fan, sushi is wonderful. Raw and wild to the taste buds, and also an aesthetic pleasure to sit and eat, watching the itamae-san, the sushi master chef in his white, martial art-looking costume, doing his command performance at the counter.

The only thing I don’t like about sushi is that it’s so expensive, at least in the quantities that my wife and I tend to consume. Which is why it’s a worthwhile investment of time to learn to make your own, creating a private sushi feast any time you like, even if you’re living deep in the heart of Mid-America, far from the oriental corners of the world. I was lucky; I learned how to make sushi in a one-day workshop held in a Japanese restaurant in San Francisco, and I think this is probably the best way, to learn in person from an expert rather than from a book. However, there is one book I’ve found that does a good job of clearly explaining the different steps of sushi preparation, the gorgeously photographed The Book of Sushi by Kinjiro Omae and Yuzuru Tachibana, published in Tokyo and New York, with a foreword by the famous silver flute player, Jean-Pierre Rampal. 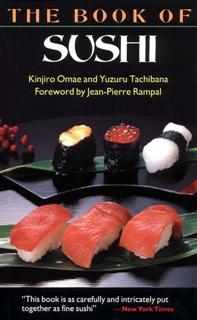 Sushi takes time to prepare, which is its greatest drawback for the home chef. Usually, if I’m going to do a sushi dinner for friends, I start around three in the afternoon in order to get the rice properly cooked and cool enough to use. But as long as you have The Book of Sushi handy, and a bamboo roller, the recipes themselves are not so difficult to figure out. Getting the rice just right is the most challenging part, at least for me, since I happen to live in the Rocky Mountains at 7000 feet, making any kind of rice a challenge. But hey, even bad batches of sushi make tasty eating.

Like most home sushi chefs, I concentrate on the seaweed rolls rather than nigiri sushi with its need for a variety of very fresh fish. Once you get the basic idea of rice and seaweed you can put just about anything inside. My favorite invention is a seaweed roll that combines smoked salmon, avocado, asparagus, and slivers of red pepper.

Sushi tastes like the ocean, not a taste for everyone. But if you’re an addict, you’ll be happy as a clam if you give The Book of Sushi a try. Along with recipes and the basic method of preparation, the authors have written a history of sushi, a glossary of terms, even how to order sushi in a restaurant and figure out the bill. What more can any fish loving person want? Irasshai!

The Book of Sushi , by by Kinjiro Omae & Yazuru Tachibana